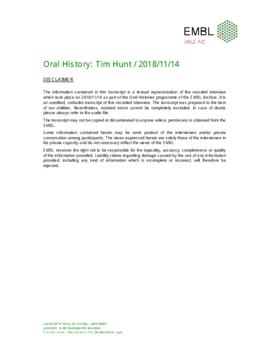 This is an interview with the 2001 Nobel Prize Winner Tim Hunt who became member of EMBO in 1978. In this interview, Tim Hunt gives an insight of his career as a biochemist before joining EMBO, especially his work on S 35 Methionine. He also describes his connections with other scientists at EMBL since 1978. Furthermore, Tim Hunt reflects the meaning of the Data Library and the role of EMBO and the EMBO journal in general.