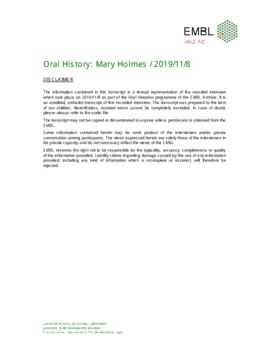 This is an interview with Mary Holmes who was the Librarian of EMBL Heidelberg from 1974 to 1998. In this interview, Mary Holmes describes how she became EMBL's first Librarian and the work she had to do in the first years of EMBL. Mary Holmes also talks about how she perceived the transformation of libraries in general and of EMBL's Szilárd Library in particular during the period she worked in this position, in particular with regard to computerisation. Furthermore, she talks about her impression of EMBL's first three DGs.