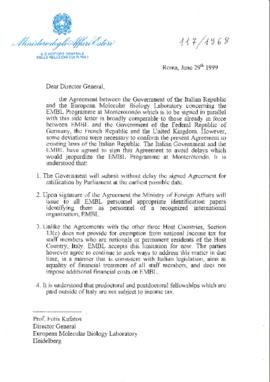 The date on the cover sheet of this official copy and the accompanying letter from the Italian Embassy is incorrect: it reads 1996-06-29, instead of 1999-06-29. 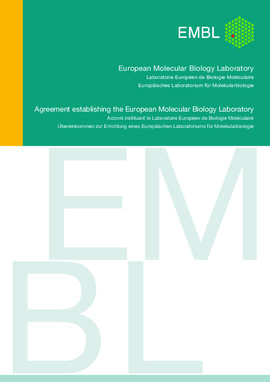 This subfonds contains only copies of Official Bulletins that were kept by the EMBL Council Secretariat and does not constitute an exhaustive collection of such publications that concern EMBL.

This subfonds contains documents pertaining to the use of the site of EMBL Heidelberg, in particular lease hold agreements (Erbbaurechtsverträge) and associated correspondence. Some documents are original, while others are copies.

Internal policies (IP), guidance notes and other documents that are principally internal to EMBL codify the implementation of EMBL's Staff Rules and Regulations. This subfonds brings together different files of IP collated at different times.

This file contains letters of ratifications from EMBL's Member States, including the letter explaining the coming into effect of the Agreement Establishing EMBL following its ratification by France and papers explaining the membership of Belgium.