This collection contains the material created as part of the EMBL Archive Oral Histories Programme, which started in 2016.

In this interview, Ada Yonath from the Weizmann Institute of Science who received the Nobel Prize in Chemistry in 2009 talks about the development of her research on ribosomal crystallography. Especially her electron microscopy work together with Kevin Leonard and Sir John Kendrew is linked to the EMBL Heidelberg.

Transcript of the interview with Petra Riedinger

In this interview, Jacques Dubochet who won the 2017 Nobel Prize in Chemistry descibes his work as a group leader at EMBL Heidelberg. This interview contains Dubochet's description of the research environment in which he developed cryo-EM sample preparation and vitrification. Furthermore, the interview contains some information about Dubochet's early life and career as well as his assessment of the current state of science, especially with regard to genetic editing. 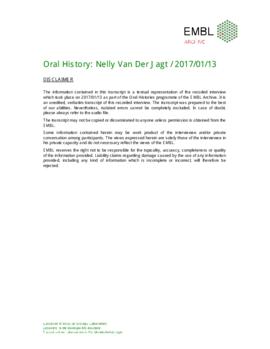 Transcript of the interview with Nelly van der Jagt

In this interview, Emerald Perlas who started working at EMBL Rome in 1999 reflects his work as a histologist in Monterotondo, especially his recruitment process and the working environment.

In this interview, John Tooze who was the Executive Secretary of EMBO from 1973 until 1994 reflects his work as a scientific coordinator at that time. He especially describes his perception of the foundation process of EMBL, the emergence of its institutional design and his introduction of the EMBO journal. Furthermore, he gives an assessment of the general challenges EMBL had and has to face. 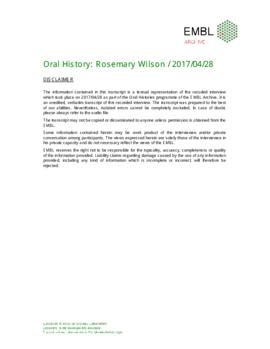 Transcript of the interview with Rosemary Wilson