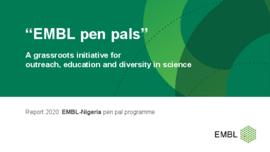 Report on the EMBL Pen Pals 2020, which connected EMBL staff with students in Nigeria.

Documents and minutes from meetings of the EBI Ad Hoc Advisory Committee.

This file contains letters regarding appointments to SAC and general SAC business, including the evaluation of EMBL programmes and staff, and minutes of meetings.

Documents and correspondence between EMBL and DESY regarding access, research, facilities and collaborations.