This in an interview with Rosemary Wilson who was responsible for scientific training and later became the outreach officer at the EMBL Hamburg. In this interview, Wilson describes how she was able do define her role in the field of scientific communication. She explains the evolution of editorial processes at EMBL as she perceived them and gives some examples as well. Wilson also makes an assessment of the dynamics of communication in terms of the different EMBL sites and describes the "Night of Science" in Hamburg she helped to organize.

This is an interview with the 2019 John Kendrew Award winner Tanmay Bharat who was a PhD student at EMBL Heidelberg from 2008 until 2012. In this interview, Tanmay Bharat describes how he started working on pathogenic viruses in John Brigg's group. He also explains why he started working on bacterial antibodies using cryo-electron tomography. Furthermore, he reflects the upcoming of personalised medicine nowadays in this interview.

This is an interview with the 2001 Nobel Prize Winner Tim Hunt who became member of EMBO in 1978. In this interview, Tim Hunt gives an insight of his career as a biochemist before joining EMBO, especially his work on S 35 Methionine. He also describes his connections with other scientists at EMBL since 1978. Furthermore, Tim Hunt reflects the meaning of the Data Library and the role of EMBO and the EMBO journal in general. 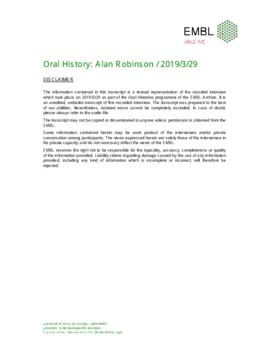 Transcript of the interview with Alan Robinson