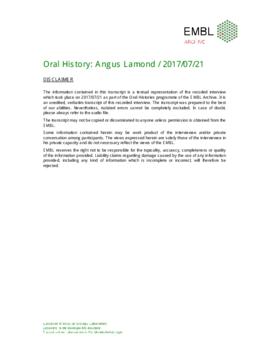 Transcript of the interview with Angus Lamond

This is an interview with the physicist and the computer scientist Philipp Keller who has been a graduate student since 2005 and part of the labs of Ernst Stelzer, Jochen Wittbrodt and Michael Knop at EMBL and who completed his PhD at EMBL as well. In this interview, Philipp Keller especially explains how he was able to transfer his physical understanding of systems to research at EMBL, for example concerning his research on zebrafish embryo. Philipp Keller also describes the framework conditions at the EMBL in comparison with the Janelia Research Campus where he works since 2010.

This is an interview with the physicist and mathematician Matthias Mann who has been group leader at EMBL Heidelberg from 1992 to 1997. In this interview, Matthias Mann explains his research in the area of mass spectrometry and proteomics he was involved in at EMBL. This interview contains reflections of Matthias Mann concerning his relationship to other researchers at EMBL, his impression of the different Directors General Furthermore, you will find some information about Mann's current work in clinical contexts as well as some advice about assembling a research group and about computation in biology in general. 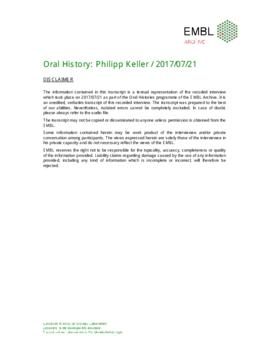 Transcript of the interview with Philipp Keller 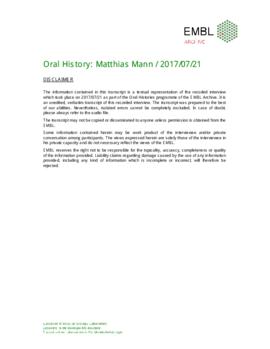 Transcript of the interview with Matthias Mann

This is an interview with the cell biologist Harald Stenmark who has been a postdoc in Marino Zerial's Lab at EMBL from 1991 to 1994. In this interview, Harald Stenmark describes how he became aware of EMBL and how his time at EMBL has promoted his further career. Furthermore, he explains his functional studies of small GTPase Rab5 he carried out at EMBL and gives an insight into his later work on the EEA1 protein and the identification of the FYVE domain. 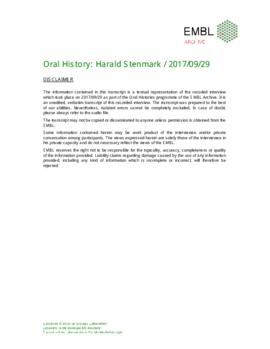 Transcript of the interview with Harald Stenmark