This collection contains the material created as part of the EMBL Archive Oral Histories Programme, which started in 2016.

In this interview, Ada Yonath from the Weizmann Institute of Science who received the Nobel Prize in Chemistry in 2009 talks about the development of her research on ribosomal crystallography. Especially her electron microscopy work together with Kevin Leonard and Sir John Kendrew is linked to the EMBL Heidelberg.

This is an interview with Frieda Glöckner (born Leenart) who was EMBL's meetings secretary since 1975. In this interview, Glöckner describes how she worked at Brussels since 1970 close to EURATOM and how she perceived the development of EMBL from a project to its foundation in this position. Glöckner also describes the signing agreement of EMBL in Geneva at Cern and the installation of the first buidlings. Beyond that, this interview contains some description of the Second World War period Glöckner witnessed as a child and how she settled up it Heidelberg when EMBL was established there. 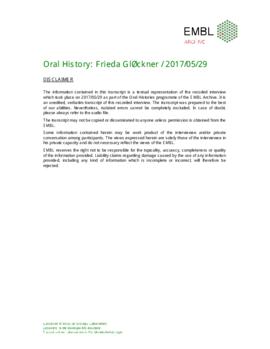 Transcript of the interview with Frieda Glöckner