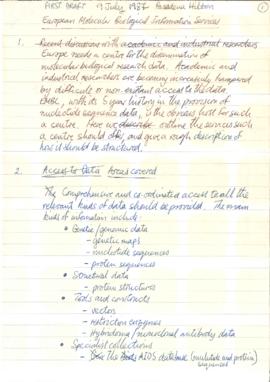 After initial training in psychology, Cameron spent the majority of his career working with databases. He joined EMBL in 1982 to work on the Nucleotide Sequence Data Library and was subsequently involved of the development of the Data Library into a new EMBL outstation, the European Bioinformatics Institute (EMBL-EBI).

Upon Cameron's retirement in 2012, this material was left in an office at EMBL-EBI. In 2015, it was transferred to Heidelberg for accession in the EMBL Archive.

This fonds remains organised in the general order in which Graham Cameron kept these records.
When folders have been renamed, the original name is recorded in the "System of arrangement" section of the archival description. If nothing is included in that field, the folder was unnamed.