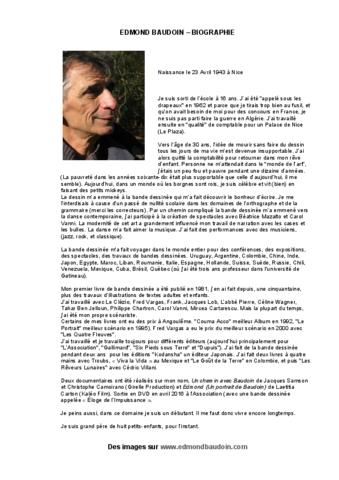 Edmond Baudoin was born in Nice, France, on 23 April 1942. He left school at 16 and completed his military service. After this, he trained and worked as an accountant at a luxury hotel in Nice. In his early thirties, he left accounting to draw. Through this work, he eventually started working on comic books and graphic novels. He published his first book in 1981 (“Civilisation”). As well as writing his own texts, Baudoin has collaborated with many authors, including JMG Le Clézio, Fred Vargas, Frank, Jacques Lob, L’abbé Pierre, Céline Wagner, Tahar Ben Jelloun, Philippe Chartron, Carol Vanni, Mircea Cartarescu.
His work has been rewarded with a number of prizes.
In 2015, working with the mathematician Cédric Villani, Baudoin published “Les Rêveurs lunaires” which tells the stories of Werner Heisenberg, Alan Turing, Leó Szilárd and Hugh Dowding.

This document was downloaded from Edmond Baudoin's personal website (www.edmondbaudoin.com) on 5 February 2016.

This is a PDF/A, created on 5 February 2016 from the PDF document downloaded from the http://edmondbaudoin.com.