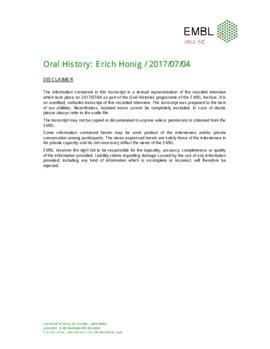 This is an interview with Erich Honig who was a group leader and the driver of the EMBL in Heidelberg since 1975 until he retired in 2008. In this interview, Honig describes how his job as a driver has developed since the time he started at EMBL. Furthermore, this interview mainly contains general impressions of Honig concerning the working environment at EMBL.