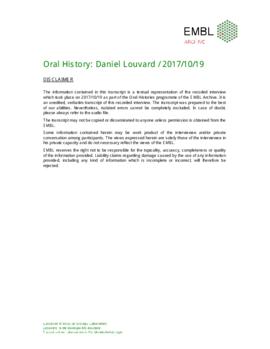 This is an interview with the French cell and molecular biologist Daniel Louvard who was Head of a research group at EMBL Heidelberg from 1978 until 1982. In this interview, Daniel Louvard explains why he decided to work at EMBL as a postdoc and how he developed his research on epithelial functions, on membrane trafficking and on producing monoclonal antibodies at that time. Furthermore, Daniel Louvard describes the working environment at EMBL, how he later became Head of Unit at the Pasteur Institute and his scientific work after his time at EMBL, especially his foundation of the ATIP-avenir program.